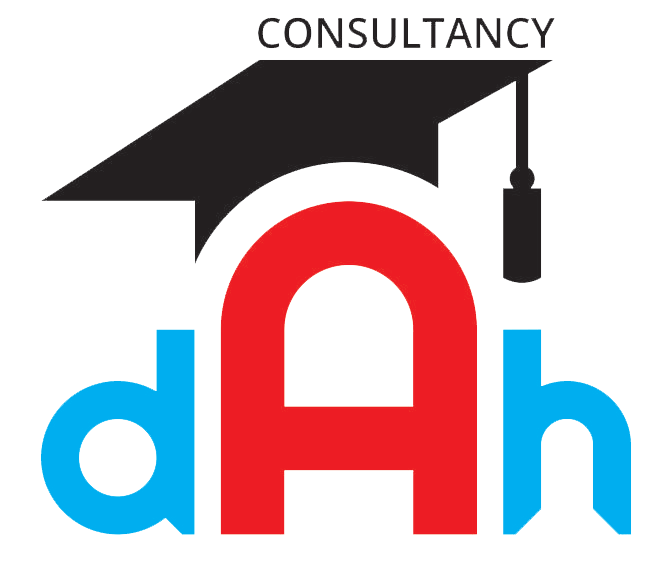 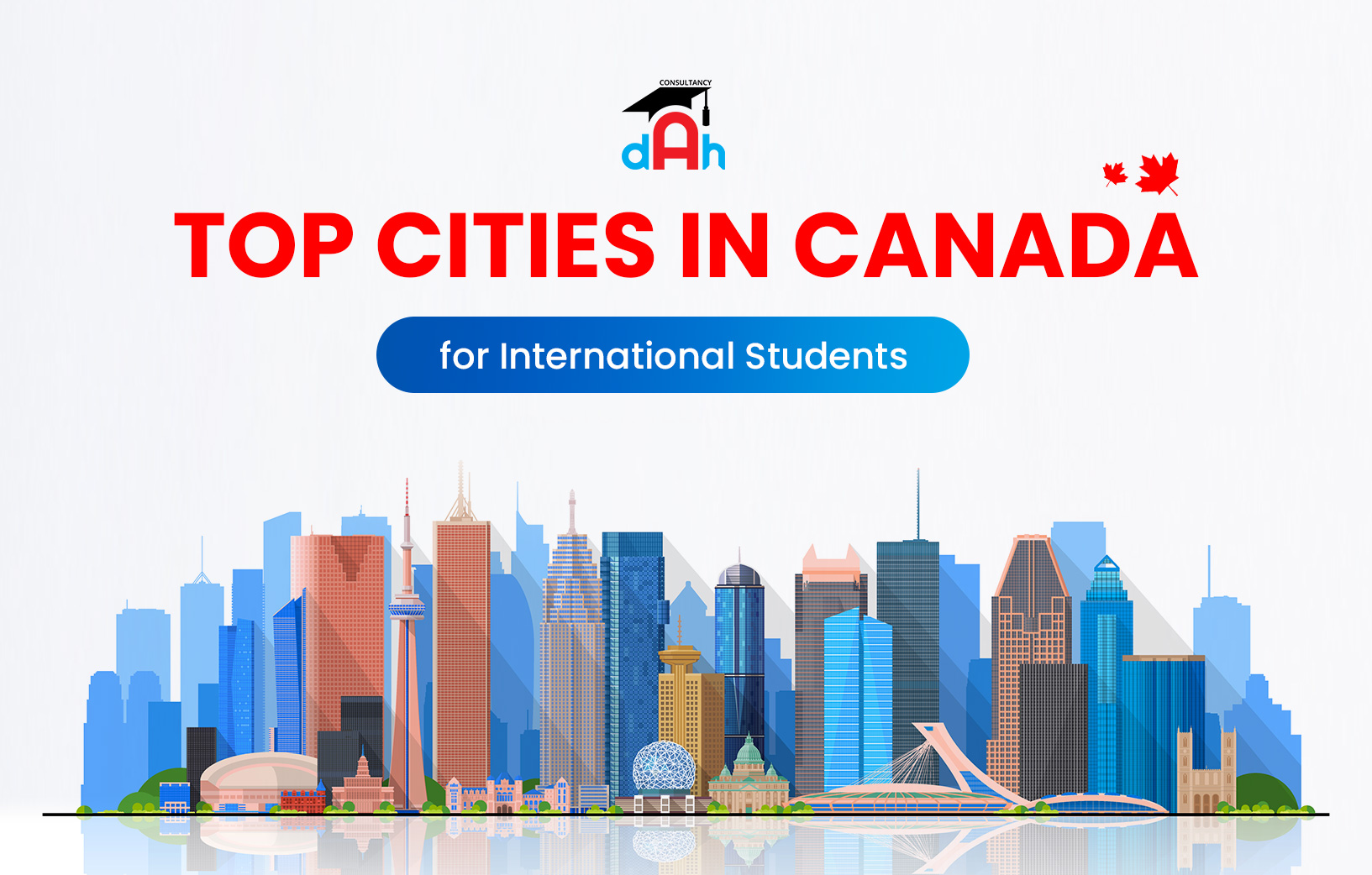 Canada has a large number of foreign students. It’s easy to understand why given that Canada’s education and immigration systems make it a student-friendly country.  As Canada provides a high level of education to students, making it one of the most popular studies abroad destinations in the world,

It’s not just the education system and infrastructure that attract students from all over the world, but also the Top Cities in Canada that have everything a person wants.

In this blog, we know the top cities in Canada for international students.

List of Top Cities in Canada for International Students

Education, beauty, technology, and infrastructure are all rich in Canada. In addition, these are some of the top cities in Canada for international students. From its natural beauty to its safety and peacefulness, Canada is thriving. Furthermore, Canada’s cultural diversity serves as the icing on the cake, making it stand out.

Some of the Top Cities in Canada for International Students are:

Every year, over 350,000 students go to Montreal in search of a high-quality education. The city is well-known for its festivals, comedy events, and diverse cultural offerings. French is the most commonly spoken language here, followed by English and other languages.

Here are some of the top reasons why you should consider Montreal as it provides an incredible experience for overseas students:

Top Reasons to Study in Montreal

Throughout the year, Montreal holds a variety of events and activities. This is a great way for overseas students to get acquainted with Canadian culture. Some of the finest plays, sports, music and cultural activities are held in the city.

A favorable and active employment market provides opportunities for students to get valuable industrial experience. Aerospace, video gaming, health sciences, and finance are among Montreal’s most popular industries. However, the language barrier could be a problem for those who don’t know French.

The city offers excellent public transportation that is both accessible and economical; there are more than 50 metro stations and 200 bus lines. The cost of a single ride is CAD $3 to $6. The cost of a night-out pass is CAD $5. Tickets and Opus cards are accepted on buses.

International students will find Montreal to be a safe and pleasant place to study. They may utilize public transit and roadways whenever they want without fear of being hurt. According to The Economist, Montreal is the safest city in the world to live in.

Learn about Top Universities | Colleges in Canada for International students

According to students, Montreal is a welcoming and cheap city. They like this city because of its culture, gastronomy, ethnicity, and entertainment.

Vancouver is one of the top cities in Canada for International students. However, it is ranked 17th in the world among student-friendly cities. The city is well-known for its enthralling natural beauty and nice atmosphere.

Top Reasons to Study in Vancouver

Here are some of the top reasons why you should consider Vancouver as it provides an incredible experience for overseas students:

Vancouver has a diverse culture, with the majority of students are European Canadian followed by Chinese. English, Irish, and Scottish, and they form the largest ethnic group in the city.

Vancouver has a well-developed public transit system that is both convenient and secure. Rapid trains, buses, sea buses, and rail commuter services are available throughout the city. The city is well-connected, and foreign students may simply use public transportation to go about.

Canada has one of the greatest labor markets in the world. The city of Vancouver is well-known for its excellent career opportunities and competitive pay packages. It also provides a variety of part-time career possibilities for students to supplement their income. In addition, the work atmosphere is encouraging.

Learn about Best Course in Canada to get PR

Vancouver is a safe and tranquil city. Personal safety is excellent in the city, making it ideal for international students to study and travel in peace.

According to students, Vancouver is a culturally rich city that provides world-class education. The standard of living is good, and career prospects are many.

Students from other nationalities make up about 17% of the student body at Toronto’s institutions. Toronto is Canada’s cultural capital, with historical sites, gastronomic festivals, and art to its credit. For students searching for the top cities in Canada for international students, Toronto is the most incredible place to reside.

You might want to read about Medical Study in Canada

Here are some of the top reasons why you should consider Toronto as it provides an incredible experience for overseas students:

Top Reasons to Study in Toronto

In Toronto, students get the best of both worlds: beautiful metropolitan city life and perfect suburban life. It serves as a crossroads for enterprises, cultures, employment markets, and foreign students. Malls, restaurants, bars, retail hubs, and cultural facilities abound. International students enjoy studying in Toronto because it offers the greatest taste of Canada.

Read about Study PhD in Canada.

The city of Toronto is well-connected. Public transit is readily available and reasonably priced. The city offers simple access to a Presto card, which can be used on all types of public transportation. It provides international students who may be new to the area with easy and safe mobility.

The expense of living in Toronto is manageable. A one-room rental apartment will cost roughly CAD 2020, and three meals will cost around CAD 75 to 90. The transportation fee is around CAD 110. Students can make a living by working up to 20 hours per week in part-time occupations.

It has economically developed with a growing number of work possibilities. As a result, Toronto has a full-fledged job market. International students from a variety of backgrounds can find acceptable professions, with competitive pay packages.

Learn about Intakes in Canada

Toronto is a culturally diverse city with residents speaking over 140 languages. Overseas, thousands of students from different nations, such as Ireland, the United Kingdom, and China, make up the major cultural groupings.

Toronto, Canada’s largest city with a population of 3 million, attracts a higher number of students than some other Canadian cities. Students are finding Toronto to be culturally diverse. They have access to schooling as well as a variety of job possibilities to help them support themselves.

With a thriving and diverse student population, Ottawa is one of the most student-friendly cities in the world. Winter sports in the city are well-known, such as skiing and ice skating. If you want to work in Canada, Ottawa is the best spot to search for jobs.

Here are some of the top reasons why you should consider Ottawa as it provides an incredible experience for overseas students:

Top Reasons to Study in Ottawa

In terms of cultural diversity, Ottawa is a diverse city. There are students from Asia, the Middle East, Africa, and Europe among the foreign students. Spanish, English, Italian, Arabic, and German are the most frequent languages spoken here.

The city of Ottawa is well-connected. It is a well-planned metropolis with excellent communication and transportation systems. Rapid buses, trains, railways, and shuttles are available. There is also a specialized Para Transport service for physically handicapped international students.

Ottawa has a crime rate of 0 percent. It is a very safe and quiet place in which international students may study without fear of being harassed.

The Ottawa Technology Park is the largest employment center in the country. It employs around 5,66,000 international students from various countries.

The cost of living in Ottawa is modest. Working part-time for international students is not excessively expensive and feasible. The cost of accommodation is roughly CAD 1150, food is around CAD 70, and transportation is around CAD 100.

Because Canada’s Silicon Valley demands such specialists, the IT Park draws more foreign students, especially in the field of computer science. Ottawa is enlightening and welcoming to them.

Quebec City, the capital of the French-speaking province of Québec, is known for its architecture and European feel. It is a lively city that organizes a variety of activities. The Winter Carnival is a major event, and it includes a variety of winter activities. For international students, it is also the cheapest city in Canada.

Here are some of the top reasons why you should consider Quebec as it provides an incredible experience for overseas students:

Top Reasons to Study in Quebec:

Quebec City is Canada’s second-largest metropolitan metropolis, behind Montreal. Along with the gorgeous scenery, students have access to all of the city’s well-known centers and services.

The cost of living in Quebec is low. The cost of housing is around CAD 550 to 800, while the cost of food is approximately CAD 60.

Learn about Study Nursing in Canada from Nepal

This city is well-connected and has excellent transit options. It is a student-friendly city due to the low cost of public transportation. Buses cost around CAD 3, taxis cost about CAD 1.70 per mile, and there are many bicycles and two-wheelers available.

In comparison to other Canadian cities, Quebec has a wealth of options. There are plenty of high-paying job opportunities for students, and there is no shortage of work. International students can easily find part-time work to supplement their income.

Quebec City is often regarded as a safe and secure city. There are almost no public crimes or acts of violence committed.  The people here are welcoming and liberal. Because of the security and serenity, foreign students find it simple to pursue education in Quebec.

According to students, Quebec City provides an exceptional education that is both affordable and accessible. Laboratories, sports fields, and performance halls are all available at the institutions.

Consultancy Dah is here to assist you in choosing the city where you believe you’d fit in. You have nothing to worry about.

FAQs on Top Cities in Canada for International Students

Which city has the largest number of international students in Canada?

Toronto is Canada’s largest city, with a population of 6 million people, and it is also the country’s most diversified city, making it one of the top cities in Canada for international students.

Which city in Canada has more job opportunities for international students?

Canada has developed cities with infrastructure and safety that attract students for not only study purposes but to grab employment opportunities too. Some of the cities in Canada for international students with employment are
– Toronto
– Quebec
– Ottawa
– Victoria
– Saskatchewan
– Vancouver

Which city is better for international students in Canada, Toronto or Vancouver?

International students like Vancouver and Toronto because they provide a good level of life. Rent, food, and transportation are all fairly expensive in both cases. When it comes to items like rent, groceries, and basics, Vancouver outperforms Toronto.

What are the top cities in Canada for international students?

There are many developed cities in Canada, attracting students from all over the world. Some of the top cities in Canada for international students are:
– Montreal
– Vancouver
– Toronto
– Ottawa
– Quebec